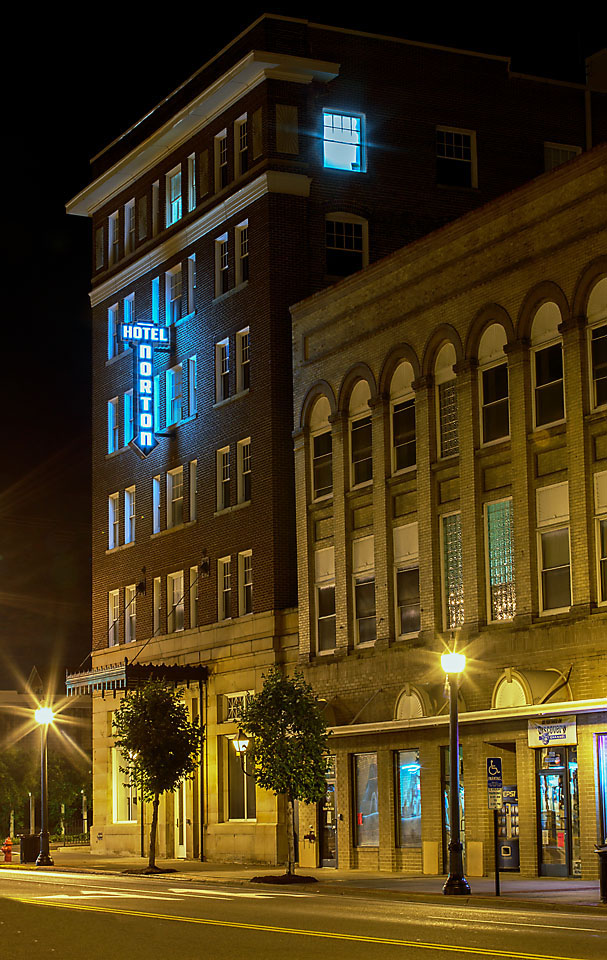 Being a small city means that there are not large areas of undeveloped property that could be turned into our field of dreams. So instead of building a large industrial park and competing with all of the regional parks, the philosophy in the City of Norton has been towards the benefits of redeveloping property. Our first redevelopment project had been to take a former Piggly Wiggly grocery store which had been vacant for over 15 years and turn it into the Virginia Relay Center operated by AT&T. After completion of the Virginia Relay Center, the Norton Industrial Development Authority (NIDA) turned its attention to the historic Hotel Norton. The question was not should NIDA do something with the building but rather, "What do you do with a dilapidated six-story corner building that has been a local landmark for over 75 years?"

The Hotel Norton was built in 1921 at a cost of $375,000. According to an editorial in the local newspaper at that time, “You can see touches of New York, Chicago, and St. Louis in Norton every day now. All you have to do is lounge in the lobby of the new six-story hotel and watch strangers go in and out.” and “with pardonable small town pride, Norton can point to this Hotel as a connecting link between it and metropolitan centers."

In 1987, NIDA purchased the building from the previous owner and began the long and winding trip to save the structure. It should come as no surprise that, due to the condition of the structure, little or no interest surfaced. In an ironic twist, by 1992 the city was now faced with the serious dilemma of either sinking more money into the structure or having to demolish the same building which it had worked so hard to save. In 1994 a difficult decision was made to save the structure and construction began immediately.

Interest and prospects increased dramatically with Phase I of the project, which stabilized and turned the structure into a shell building with no electricity, plumbing, or elevator. However, it became apparent that in order to fully market the building that NIDA needed to begin Phase II, which would build-out the lobby, one upper floor, and install the necessary infrastructure such as electrical, plumbing, and an elevator.

As if it was fate, prior to beginning construction of Phase II, a truly special firm, Logisticare was attracted to our project and became our first tenant. Prior to build-out and occupancy by the tenant, the tenant signed a lease for their second floor. In addition, the Mountain Empire Regional Business Incubator approached NIDA about becoming its second tenant by leasing a floor to provide locations for startup businesses. Phase II was completed and the Hotel Norton reopened for business in December 2001. See Photos of Phase II Completion.

On December 5, 2001, the Commonwealth of Virginia officially placed the Hotel Norton on the Virginia Landmark Register and on May 16, 2001 it was added to the National Register of Historic Places. In addition, in 1992 the Hotel Norton Project received a Virginia Preservation Award from the Preservation Alliance of Virginia, a prestigious Achievement Award from the Virginia Municipal League, and an Award of Excellence from the national architectural firm of Dewberry & Davis.

A judge from the Virginia Municipal League noted, “Norton presented a premier example of downtown revitalization, economic development ingenuity, and leveraging of community, regional, and state assets. It is rare that a single project can enhance civic pride, create a community facility, support historic preservation, and provide several types of economic opportunities for all citizens.”

A Source of Community Pride

After completion of Phase II, NIDA was surprised that people wanted to rent the Hotel Norton lobby for special events such as, wedding receptions, receptions, birthday parties, and proms to name a few. Through January of 2014, 595 special events, hosting over 53,557 people, have been held at the Hotel Norton since December of 2001. Breathing life back into this historic structure was wonderful but the most important benefit of the project by far was the creation of jobs. Today several hundred people are employed by Logisticare or the tenants of the business incubator.

The Norton Industrial Development Authority invites you to visit and let us tell you about how working together, we can make opportunities become realities.

For more information about this project or the City of Norton, please call the City Manager at (276) 679-1160.
Small Business
Location
Partners
Available Properties
Contact Us
Government Websites by CivicPlus®
[]