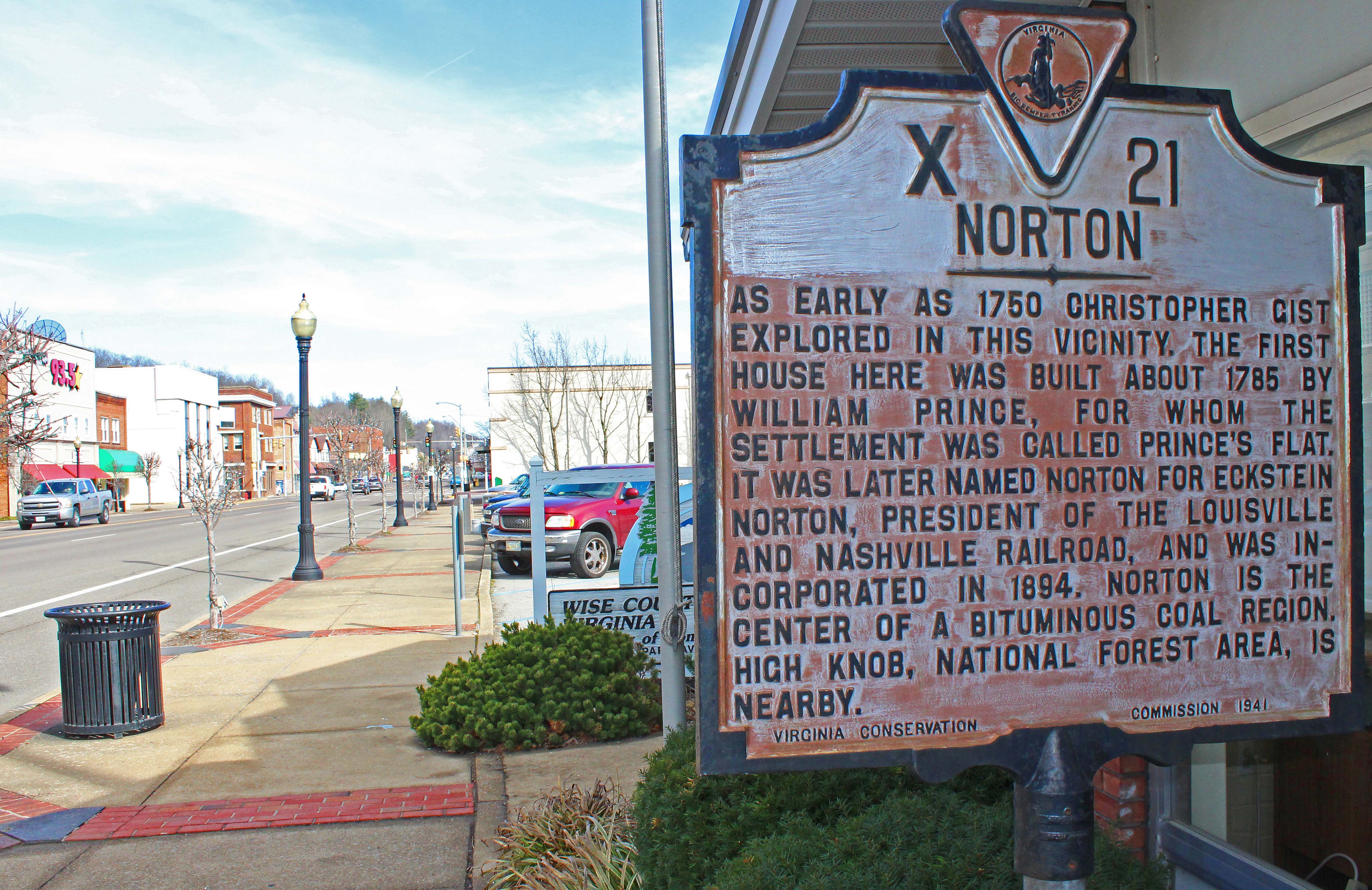 The Evolution of Norton

Norton's beginnings can be traced to as early as 1750, as referenced in the historic marker pictured above. Continue reading below for more information about about the city's early beginnings.

Early settlement occurred in Norton in the late 18th century. William Prince built a home in the area in 1787. The settlement was later named Prince's Flat in recognition of Prince's settlement. The area remained Prince's Flat for a century and, as a rural frontier area, it prospered through development of agriculture and lumber-related industries.
The first U.S. post office was established in 1883 and named Eolia. The area was rechristened Norton in 1890 to honor Mr. Eckstein Norton, president of the Louisville and Nashville Railroad.
It was during this boom period that Norton was connected to the industrialized East Coast by steel ties of the Norfolk and Western Railroad. In 1889, the Norfolk and Western Railway Company dispatched five men to lay out a town.

Arrival of Freight & Passenger Trains in 1891

Freight and passenger trains arrived on the scene in 1891, and Norton found itself heir both to a new prosperity and to the aspects of municipal disorder brought on by the toughs, who were associated with mines and railroads.
Expansion of population, commerce and industry followed in the wake of railroad and related mining and industrial development. An urban settlement emerged and began to expand.

On April 6, 1954, the Virginia General Assembly granted a city charter to the Town of Norton, thus creating the first city in far southwestern Virginia and, to this day, the only city in Wise County. Eight years later, in 1962, the City of Norton annexed 3/5 of a square mile of land from Wise County - a largely vacant area on the northeast side of the city adjacent to the community of Esserville.
Twelve years later, Norton again sought additional lands from Wise County and nearly doubled its land area when the county agreed to a transfer of 3.6 square miles of land to the city.
Of note in these two annexations by the city, little population or area subject to urban development was involved; e.g., the doubling of Norton's municipal land area in 1975 netted the city a gain of only 84 residents.

In recent years, the City of Norton has seen tremendous commercial growth along the U.S. 58 Corridor in the eastern section of the city. After many years of hard work, the long-awaited U.S. 23 Norton bypass was completed in 1996. The bypass has relieved traffic congestion on Park Avenue - previous traffic counts estimated over 24,000 vehicles traveled through downtown daily - and improved the highway system for the region, which among other things, will assist in the region's economic development activities.
Today, the City of Norton remains a focal point of Southwest Virginia. Situated at the crossroads of U.S. 23 and U.S. 58 Alternate, the city has become the commercial and professional center for the area.

Several recent projects add to this excellent position. One example includes the receipt of a planning grant in late 2016 to develop a master plan for downtown revitalization projects. With this and other projects and continued improvements in the transportation networks, the city is expected to continue to prosper and grow.
Click here for historic photos of Norton.
Meetings & Agendas
Explore
GIS
CodeRED
Budgets & Audits
Online Services
Government Websites by CivicPlus®
[]